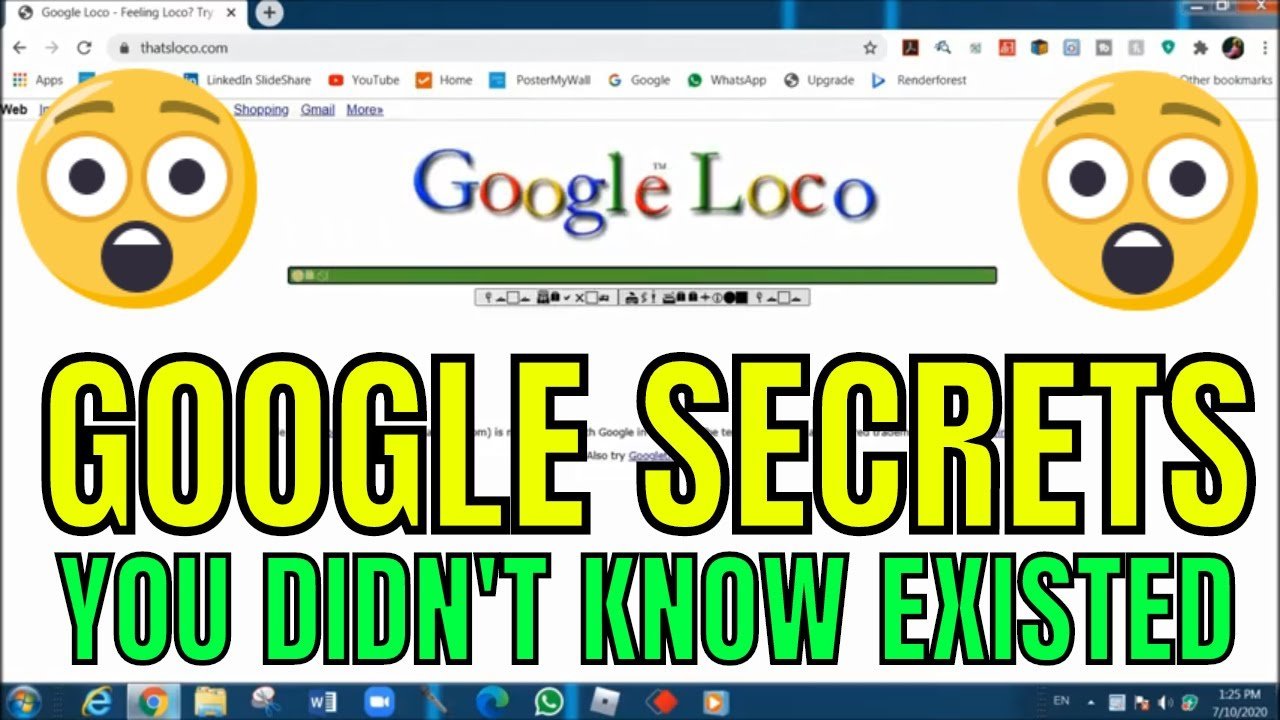 If you work in  advertising , Google is almost certainly an important part of your day to day work. But even if you have been using its search engine and other applications for a lot of years, Google hides a lot of  hidden tricks and super fun secrets . Here we tell you 25 of them, how many did you know?

25 tricks and secrets of Google

1)  If you type in the Google search engine ” do a barrel roll “, the results go around 360 degrees before returning to their original position.

2)  If you don’t have internet, Chrome will show you an error message with a  tyrannosaurus . By pressing the space bar, the tyrannosaurus will move and start a game in which you have to jump over obstacles. The game is programmed to last 17 million years, that is, approximately the time that the tyrannosaurus was on earth.

3)  One of the best known Google secrets is ” doodles “: special logos displayed to commemorate certain occasions. Here  you can see a compilation of all of them.

4)  Would you like to try a retro video game? Search ” pac man doodle ” in Google and you will see the interactive doodle they made to celebrate the 30th anniversary of this game. Your challenge: eat all the dots on the screen and not let the ghosts catch you.

5)  If you search for ” anagram “, Google suggests “maybe you meant ‘frog range'”. An example is worth a thousand explanations! Also, this trick works in multiple languages.

6)  If you type ” askew ” (crooked) in the search engine, the results page will show … well that’s crooked.

8)  Have you gotten tired of the typical friend or relative who asks you questions instead of searching for them on Google? ” Let me use Google for you ” is a page that helps you let them know.

9)  You can put Google in most official languages ​​… and also in  pirate, hacker and  Klingon languages .

10)  If you click the ” Enable globe view ” function in Google Maps, you can visit other planets. You just have to click on the “zoom out” option with the minus sign up to the limit. Then you will find yourself in space and in the navigation bar you will see the planets you can travel to.

11)  And continuing with Google Maps, if you click on ” Explore ” a gallery with 360-degree virtual tours of the area you are viewing will open. Ideal for traveling without leaving home.

12)  Do you still want to explore? With  Google Sky , you can leave the confines of our planet and go to other galaxies. You can also explore 3D versions of the Moon and Mars.

13)  A Google secret for mathematicians: if you search for ” graph for ” and a function (for example, “graph for sin (x) + cos (y)”), Google will show you the corresponding graph.

14)  Chrome Experiments  is a site that collects all kinds of  developer tests  with Chrome, from a meter to see how much your voice is like Freddie Mercury to a project that analyzes UFO sighting patterns.

15)  Do you want to convert  dollars to euros , or pounds to kilos? You can do it directly in the Google search engine. For example, if you search for “100 euros to Colombian pesos” you will see the answer before even hitting the enter key. If you complete the search, you can use an interactive currency converter directly on the Google search results page.

[Also Read: THE BEST EXTENSIONS FOR GOOGLE CHROME OF 2020]

16)  Another interactive game to pass the time: if you search ” solitaire “, you can play a game of cards directly from the search engine.

17) Doctor Who  fan  ? You can visit the Tardis (for non-fans of the series, a time machine in the form of a phone booth)  through Google Maps .

19)  Do you need to play something heads or tails and you don’t have a coin handy? Search ” flip a coin ” in the Google search engine and voila! (Also, the design of the virtual currency is very nice.)

20)  Do you want to learn something new? Try Googling ” fun fact ” and you’ll see a random curiosity, from the number of lakes in Finland to the shortest presidency in the United States.

21)  A Google secret for music lovers: in  this link , you can  play a duet with your computer  thanks to an artificial intelligence program. You can use a virtual piano keyboard or, for the more expert, connect an electronic piano.

22)  And if what you need is to set the rhythm and you don’t have a metronome handy, you just have to Google ” metronome “.

24)  Do  spinners  relax you? Well, you know that if you search that word in Google, you will find a virtual version. Already, we know that it is not the same, but instead, you can opt for the standard version or for a roulette with numbers to cast something to lots when you do not have a dice at hand.

25)  And speaking of spinners, we end this selection with the definitive Google secret. If you search for ” google birthday surprise spinner “, you will find a roulette wheel with all the playable Doodle doodles. After spinning the wheel, you can try to open the one you have to play or try your luck again. This feature was originally released to celebrate Google’s 19th birthday.